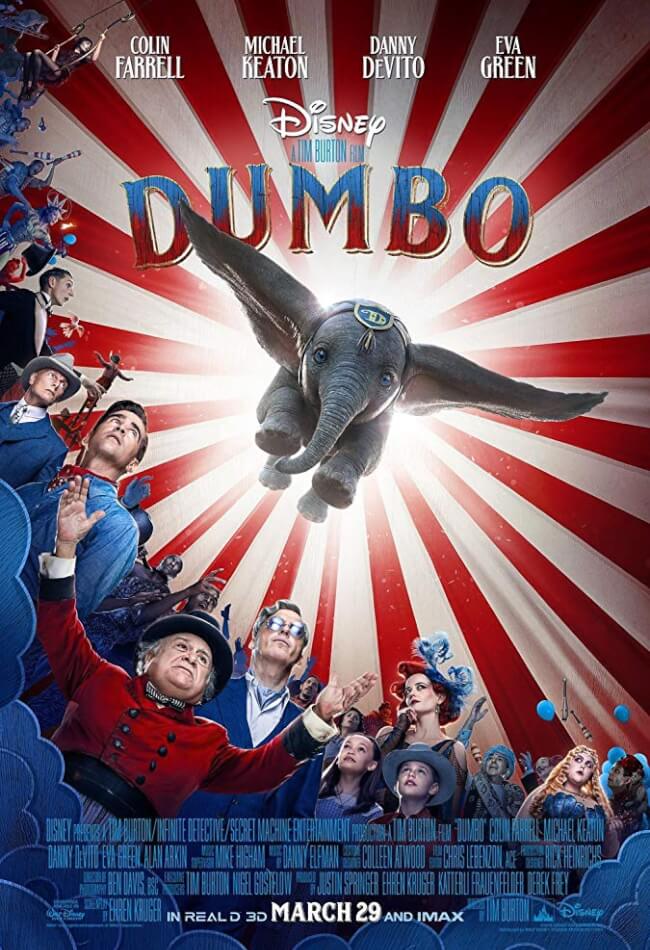 This live-action adaptation expands on the beloved classic story, "Dumbo", where differences are celebrated, family is cherished and dreams take flight. Dumbo is a newborn elephant with oversized ears that make him a laughingstock in the already struggling circus owned by Max Medici. Former star Holt Farrier and his children Milly and Joe are then recruited by Medici to take care of Dumbo. The circus goes on to make an incredible comeback when they discover that Dumbo can fly, attracting the attention of entrepreneur V.A. Vandevere. Dumbo soars to new heights after being recruited for Vandevere's newest entertainment venture, Dreamland. That is until Holt learns of the dark secrets that lurk within Dreamland.

Get to know these famous elephants in movies, from Dumbo to Pop Aye - The Popping Post
Disney's Dumbo is flying back onto the big screens in a live action remake. We take a look at the these pop culture icons, from talking elephants in animated films to ...
Box Office: Dumbo Lands at No. 1 With Soft $45 Million
Disney’s “Dumbo” had an underwhelming liftoff at the domestic box office. Tim Burton’s live-action remake of the 1941 cartoon debuted with $45 million from 4,259 North ...
Film Review: Tim Burton’s ‘Dumbo’
The key image in Walt Disney’s 1941 “Dumbo” is something out of a fairy-tale daydream: Dumbo, the baby elephant with long-lashed goo-goo eyes, a cuddly grin, and ears as long ...
Circus Act: New 'Dumbo' Sneak Peek Introduces The World-Famous Flying Elephant
The elephant can fly!...

Puterinurul88
8 April 2019
All the Disney flashbacks

Though, obviously no talking mouse and drunk Dumbo, there are things I recall from my childhood. It was a great adventure that i get to share with my child. I also cried. No shame!
Report abuse
7
Natasha Romanoff
20 April 2019
Good family film

It was amazing and I kept crying out of sheer happiness. It's a good family film.
Report abuse
2
Saiful
1 April 2019
serius syok

After "Beauty And The Beast", Disney has once again adapted another cartoon fairy tale "Dumbo" into a live-action movie to the big screen. The film tells that a female elephant of the Medici circus in the United States gave birth to a baby elephant, but this small elephant was often ridiculed by others and crowded by other animals smashed by the circus because of its disproportionately large ears. However, a pair of young siblings in the circus later discovered that the little elephant had the amazing talent to fly with big ears. The two took the name "Dumbo" for this baby elephant , and Dumbo also relied on Its unique talent has since become a superstar in the circus. . . . Behind the scenes of the film, Tim Burton led a group of Oscar elites, with a unique aesthetic and visual effects, this unique big-eared flying elephant, "flying" generally presented to the audience. In front of the movie, it is star-studded, Colin Ferrell, Eva Green, Michael Keaton, Danny DeVito, etc. are all awesome veteran actor/actress. In terms of stories, it is touching and inspiring, suitable for both young and old. In terms of visual effects, the soul figure Dumbo is vivid and cute, and it can definitely become the new favorite of Disney's children. In addition,I like the character design in the film and portrays it delicately.
Report abuse
6
Darren Chew
31 March 2019
Dumbo is a Jumbo of A Mess

Beautiful. Imaginative. Fun. But enough about Jon Favreau&#039;s Jungle Book. Despite Tim Burton's typical whimsical style and the amazing visual effects, this film is missing the most important element - a heart. Michael Keaton tries his best, hamming up the screen as much as possible - to almost campy degree at times - but the film can only soar so far when the title character feels more like a side character in his own movie.
Report abuse
10
SEE ALL REVIEWS
Leave a Rating:
Story:
Acting:
Visual:
Music:
Overall:
Submit Rating
Please rate first!
Submit rating error!